ArchiCAD's former brilliant innovation, the Morph Tool is no longer a novelty to users. Since the 2012 release of ArchiCAD, many users have described it as a great tool for drawing freer forms and also for expressing artistic freedom.


The basic concept was to create new possibilities that have never been available before and to create unique ideas and forms without restrictions. With the appearance of the Morph Tool geometric limits have disappeared since the surface and the different nodes can be freely molded and moved, while the refining of the textures has become possible on every surface. With the Morph Tool we can design unique and free elements and components, and in many cases we can avoid the use of GDL programming as well as the use of other 3D modeling programs. Besides unique ideas, complex forms can also be created by combining drawing and modeling techniques and what\'s more, there is no need for drawing as a morph can be created from any existing ArchiCAD BIM object and can be saved as an object.

One of the biggest advantages of the Morph Tool is the so called listing option, first added to ArchiCAD 17, which makes users able to list the elements of the Morph, creating opportunities for conceptual design as well as for mass modeling. The area and volume of morphs can be listed on every level, thus designers can receive information about the useful area in the early stages of the designing process.

Most architects or users of ArchiCAD who regularly worked with the previous versions think that the Morph Tool was a revolutionary invention of Graphisoft. One of the greatest advantages is that the Morph Tool makes us able to design anything. Before taking a look at some samples made with the Morph Tool, I have to mention the most important steps in the use of the device. As mentioned before, we face only minimal restraints in contrast to the conventional objects. Morph provides the opportunity to form any edge and surface by using the Push/Pull option for example. Our morph can be designed in every direction, in a way turning it into a free-hand designing process. A Morph consists of three primary sub-elements: nodes, edges and faces. These three elements can be modified individually to shape our morph the way we want to. Of course, the way our morph turns out also depends on which component or components are selected for editing. When a node, edge or surface is selected, only the model panel and some of the major control options are available. As it has been written previously, we can convert any ArchiCAD element into a morph by choosing the Convert Selection to Morph option from the Design menu or simply by selecting it from the right-click menu.

First, I created a simple form, a vase this way: previously, I saved a picture of the object I wanted to model and the very first step was to place it into 2D as a drawing element (Figure 1) then I gave it the appropriate shape and size. Right after, with the help of the Line Tool, I drew the rotational curve of the vase (Figure 2) then I clicked on the Toolbox Morph Tool, choosing the Creating a Revolved Body option. Simultaneously pressing Space and clicking on the line drawn, the program automatically creates a similar morph contour line (Figure 3). After that, I drew the rotation axis of the body and also set the rotation angle to 360° (Figure 4).


Our morph is finished with this step. In perspective view, I selected the morph and from the pop-up menu I chose Free Rotation (Figure 5), so the morph could be turned to vertical (Figure 6) and now we can say, our vase is finally in the standing position. By pressing CTRL+Shift, we can select anything within a morph, whether it is a node, an edge or a face. In this case, I selected the top of the morph (Figure 7) then I simply deleted it for the vase to be open (Figure 8). After selecting the whole shape I set the properties of the material. The last thing needed to be done is to place the finished morph or vase into an environment (Figure 9). Since morphs can be shaped easily and in many ways, I decided to make another vase.

After making the vases, I made a more complex morph, a couch. This is actually not one piece of morph, but the combination of several ones. First, I put some columns for forming the lower part of the couch just as the seat cushions (Figure 10). I shaped them with the Fillet/Chamfer Edges and the Bulge option, choosing from the pop-up menu. The next step was creating the armrests, of course, also from columns but here I only used the Fillet/Chamfer Edges (Figure 11). For the making of the backrest a placed a column again and rounded its edges and finally, I formed the four legs as well (Figure 12). Lastly, I set the material of the couch and placed the morph into an environment (Figure 13-16). 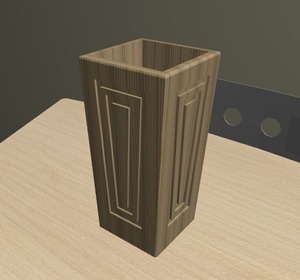 
The morphs I have designed are only small fractions of the possibilities offered by the Tool. It should be mentioned that I have rendered the images in ArchiCAD 18. The Morph Tool has been available for a few years but its popularity is continuous since its release. Unlimited artistic possibilities are the main argument in favor of the use of this tool. Another huge advantage of the tool is that it can immediately convince customers if visual plans are involved. Our plans can be created from nothing or already existing BIM elements can also be used, then be saved as objects. The revolution of ArchiCAD 16 is also referred as one of the greatest possibilities among users. The simplest and the most complex shapes can be also created and for demonstration you can check the video in which the towers of Sagrada Familia are modeled in the Morph Tool.